THE US has admitted it’s powerless to defend against Russia and China’s ‘game changer’ hypersonic weapons that are too quick to stop.

A report from the Government Accountability Office (GAO) said their speed, altitude, and maneuverability may defeat most missile defense systems, and they may be used to improve long-range conventional and nuclear strike capabilities.

The report eerily admits: “There are no existing countermeasures.”

The race for hypersonic weapons has resulted in America awarding multiple contracts this year for variations of the faster-than-sound weapons.

In August the US awarded Lockheed Martin Missiles and Fire Control a contract to develop an Air-Launched Rapid Response Weapon (ARRW) – which came with a price tag of £380Million. 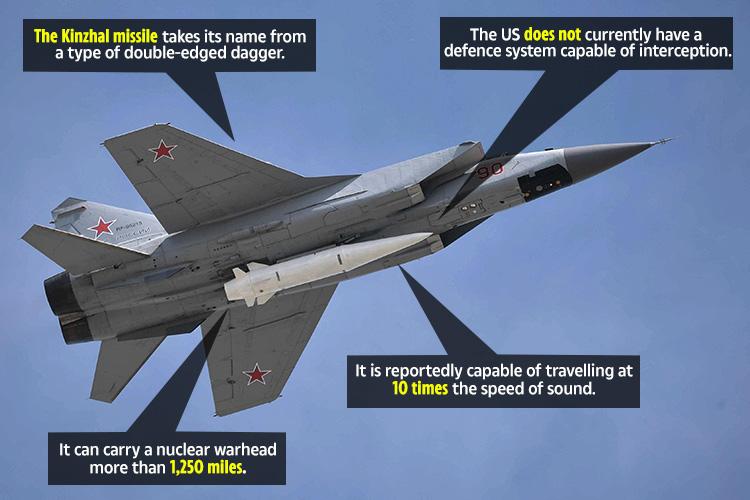 The high-speed Kinzhal (Dagger) rocket – described by the Russian strongman as “an ideal weapon” – can fly at almost 7,700mph across 1,250 miles and hit precise target

It was launched from a MiG-31 supersonic interceptor jet that took off from an airfield in the South military District of Russia’s southwest.

It was tested with more than 250 flights, in all weather conditions, since the start of the year.

The news broke as it came to light that both Putin and Trump were overhauling their nuclear arsenals for smaller “tactical nukes” that could actually be used.

MOST READ IN NEWS


The Brexit process is underway – but what is Article 50 of the Lisbon Treaty?


Evil woman raped girl and made vulnerable kids soil themselves


What is a no-deal Brexit and what happens if a deal isn’t signed?


When did Amy Louise Gerard go missing in Tenerife and what’s her husband said?

China meanwhile unveiled plans to build a hypersonic heavy bomber in February, that is capable of reaching New York in just two hours.

Researchers revealed proposals for an aircraft with two sets of wings that could soar around the Earth at more than 3,700mph – or five times the speed of sound.

Currently it takes a jumbo jet 14 hours to fly between Beijing and New York – a distance of around 6,800 miles.

In October a shocking plume of smoke seemed to reveal the Chinese testing just such a craft.