WEAPONS experts in China are building a top secret research facility to develop the world’s cheapest and deadliest bombs.

The complex –  in the mountainous Sichuan province – will use technology to simulate thermonuclear explosions on an unprecedented scale.

America already has its own Z Machine which is up and running in Albuquerque, New Mexico[/caption]

That is used in the development of nukes, from conventional warheads to hydrogen bombs which are bigger and deadlier than ever seen before.

H-bombs cost a fraction of regular nukes and are up to 1,000 times more powerful – wiping out entire cities in one devastating strike.

They cause a much bigger explosion, which means the shock waves, blast, heat and radiation all have larger reach than any atomic bomb.

To put it bluntly it means that military leaders can get a lot more bang for their buck.

Although no country has used such a weapon since WWII, experts say it would be catastrophic if a h-bomb was dropped today.

They call it a true “city killer” that could annihilate between 100 and 1,000 times more people than an atomic bomb.

Edward Morse, professor of nuclear engineering at the University of California, said the bombs dropped on Japan were equal to about 10,000 kilotons of TNT.

“Those were the little guys,” Morse told Time Magazine. “Those were small bombs, and they were bad enough.”

What’s the difference between hydrogen bombs and atomic bombs? 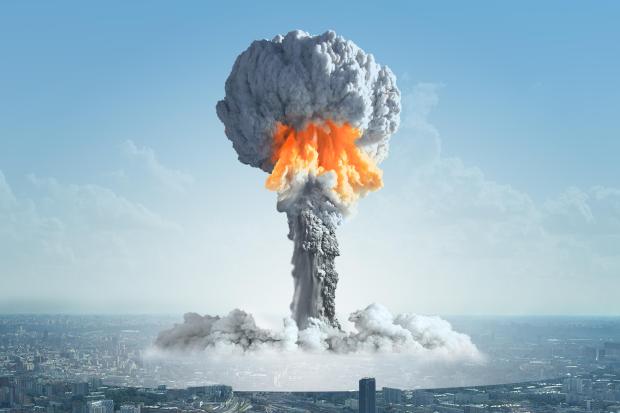 Simply speaking, a hydrogen bomb is the more advanced version of an atomic bomb.

An atomic bomb uses either uranium or plutonium and relies on fission, a nuclear reaction in which a nucleus or an atom breaks apart into two pieces.

To make a hydrogen bomb, you would still need uranium or plutonium as well as two other isotopes of hydrogen, called deuterium and tritium.

The hydrogen bomb relies on fusion, the process of taking two separate atoms and putting them together to form a third atom.

In both cases, a significant amount of energy is released, which drives the explosion, experts say.

However, more energy is released during the fusion process, which causes a bigger blast.

H-bombs, he said,  could result in a yield of up to several million kilotons of TNT, which would mean many more deaths.

Although they are harder to produce they are much lighter which mean they can be carried on missiles, according to experts.

Now Chinese researchers are building a machine to create much more extreme environments for testing weapons, reports the SCMP.

The machine is being built for the military by the Academy of Engineering Physics at China’s nuclear weapons development base in Mianyang.

It works by firing powerful electrical pulses at a target consisting of hundreds of tungsten wires, each thinner than a human hair.


Mum who drowned daughter, 4, in ‘human sacrifice’ not guilty of murder


When the pulses pass through the wires, the tungsten explodes, creating plasma with a magnetic field so strong that the exploded particles are forced inward.

The facility would allow researchers to see more clearly how new warhead designs and materials could perform under these extreme conditions.