A RESCUE mission has been mounted to protect a mysterious tribe in the Amazon jungle threatened with extermination by violent ranchers.

The Kawahiva are one of around 100 so-called “uncontacted tribes” who live the South American jungle and shun the outside world.

Their territory has been encroached upon by ranchers, many of whom are armed, and there are fears they could be wiped out.

Agents from Brazil’s indigenous affairs department FUNAI, Environment Ministry special agents and police officers have now taken part in an operation to remove the illegal ranchers from the Kawahiva’s territory.

Jair Candor heads the FUNAI team which is working to protect the Kawahiva territory said: “I am so happy, this is my dream.” 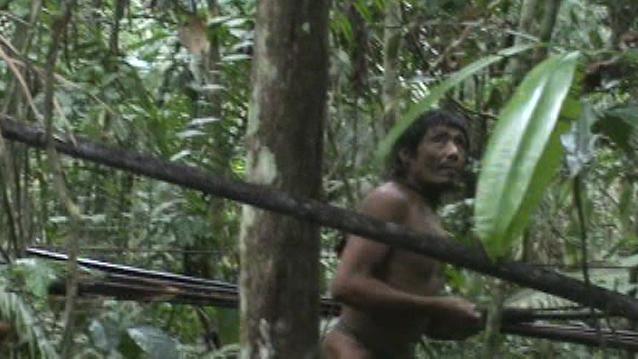 Candor continued: “We’ve put in the work and now we’ll reap the reward.

“It’s important that people know that we are not the only humans on this earth – the Kawahiva and other uncontacted tribes are out there, in their forests.

“We must protect their forest. It’s the only way they’ll survive.”

The Kawahiva became well known when a chance encounter with members of the tribe was filmed by FUNAI.

These images remain some of the most astonishing footage ever seen of uncontacted people.

Stephen Corry, director of Survival International, said: “The Kawahiva have experienced terrible trauma in recent decades, but some still survive, and we’re determined they won’t share the fate of so many tribal peoples in the past.

“If their land is protected they can thrive, like the Sentinelese in the Andaman Islands.

“But they’re going to need all the help they can get to see the legal process to protect their land completed.”

Earlier this year incredible footage emerged of the last known survivor of an Amazonian tribe who has lived alone for 22 years in the jungle.

The man – thought be in his 50s – is believed to hunt with a bow and arrow for survival and has been filmed felling a tree.

He is believed to be the only survivor of a group of six killed during an attack by farmers and land grabbers in 1995.

MOST READ IN NEWS


Teen knifed granddad to death in row over fag then boasted ‘Just done an M, bro’

‘LUCKY TO BE ALIVE’


Three stabbed by ‘man only wearing underpants’ at GPs’ surgery

‘OUR WORLD AND JOY’

The Kawahiva’s territory lies near the town of Colniza, one of the most violent areas in Brazil, and 90 per cent of the area’s income is from illegal logging.

It’s likely the tribe avoids contact with mainstream society due to attacks, as well as the fear of disease brought in by outsiders.

The process of securing their land began some years ago when the existence of the Kawahiva was confirmed.

Brazil’s government began to map out their territory for their exclusive use, as is required by national and international law.

Councillors from Colniza have lobbied the Minister of Justice to drastically reduce the size of their territory, to allow more loggers, ranchers and farmers to move in.
However, two years after the decree was signed, the authorities are now starting to remove the invaders.